Filming in the Via Dolorosa 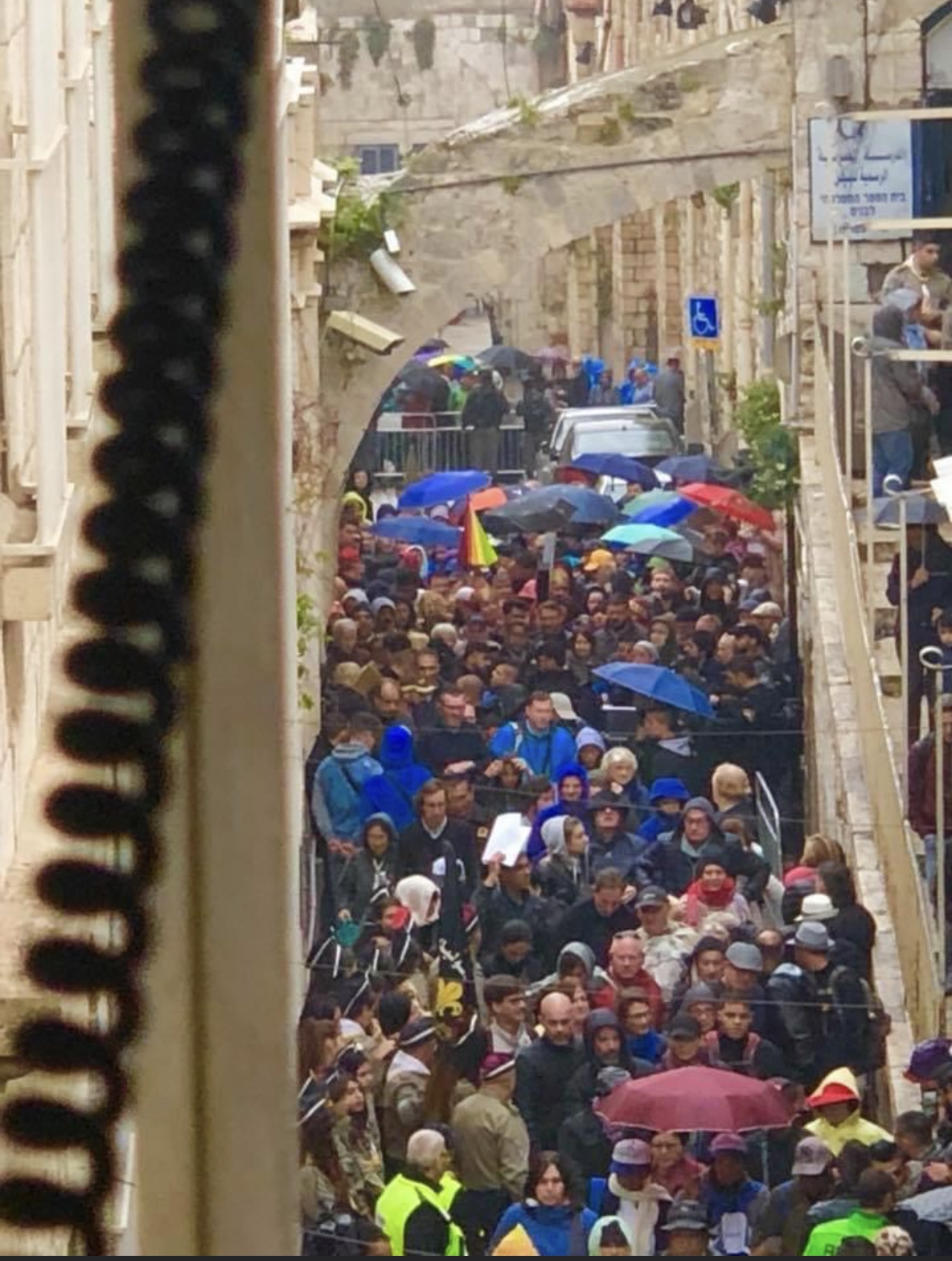 The “Via Dolorosa”, literally “The Path of Sorrow” is also known as the “Way of the Cross” where Jesus Christ, condemned to death, made His way, carrying the heavy cross on which He was to be crucified.

The traditional route of the Via Dolorosa includes fourteen stations, where each station represents a separate milestone in Jesus’ long walk from Condemnation to Crucifixion. Since earliest times interest in Christ’s suffering until His final moments has been a central aspect of Christianity. The 14 Stations of the Cross were designated by monks in Western Europe during the late middle ages.

The First Station is situated in the courtyard of the Omariya School next to the area where the Temple once stood; and could well have been the location of the Antonia fortress, the Praetorium, where Jesus was publicly scourged and condemned to death by Pontius Pilate. It believed that in this small domed building, Jesus was crowned with the Crown of Thorns, an act of irony on behalf of the onlookers who mocked Him. It was here that the crowds called for the release of Barabas, the thief, as opposed to releasing Jesus.

The Second Station – IMPOSITION OF THE CROSS

The Church of the Flagellation is one of two churches situated at the Second Station. The stain-glassed windows depict Pontius Pilate washing his hands of the blood of Christ before Jesus was flogged by the angry masses. On the ceiling of the chapel is a depiction of the Crown of Thorns. On the ceiling of the church is a depiction of Jesus’ Crown of Thorns.

The Church of the Condemnation

Directly opposite the Church of the Flagellation and separated by a courtyard is the Church of the Condemnation and the Imposition of the Cross. It is believed that somewhere in this vicinity the Cross was placed on Jesus’ shoulders. One can see fourteen crosses, representing the fourteen customary stations. A piece of a Roman floor is believed to be part of the floor of the Praetorium where Jesus was sentenced.

To the west of the Church of the Condemnation stands the Sion Sister’s Convent and contains an extensive Roman pavement, known as Lithostrotus. This is traditionally believed to be part of the same floor on which Jesus was condemned. This church is not considered to be one of the fourteen stations but is certainly associated with Jesus’ last steps. On this piece of pavement, you can see traces of an ancient game played by Roman soldiers.

Adjacent to the Sion Sisters Monastery is the Ecce Homo Church famous for its ancient arch which spans the Via Dolorosa. For centuries people have believed that this is the spot where Pilate presented Jesus to the people with the words “Ecce Homo” – Behold the Man.

The Greek Praetorium: The Prison of Christ

The Third Station commemorating Jesus’ first fall, is now marked by a small chapel. The fall of Jesus is not mentioned in the Gospel but it is believed that it happened near the site of the ancient Fish Gate. Jesus was exhausted after the savage treatment He had already received and fell under the weight of the Cross before reaching the gate.

This Fourth Station is situated at the Church of Our Lady of Spasm where Jesus and His mother met on His way to Calvary. Here we find a preserved piece of a 4th-century mosaic that according to tradition displays the imprint of the shoes of Mary the Mother of Christ.

The Fifth Station: SIMON OF CYRENE

The Fifth Station is marked by a small chapel dedicated to Simon of Cyrene, the passerby who aided Jesus by shouldering His cross. At this station there is a handprint on the wall; according to tradition, the handprint is that of Jesus.

The Sixth Station is the traditional location of the house of the legendary Veronica. It seems that in ancient times women lined the roads along which condemned criminals were led to execution. One of these women is said to have stepped forward to clean the blood and filth from the face of Jesus as he passed on His way to Calvary. The image of his countenance is said to have remained on the cloth which she used, hence the name – VERA ICONE, true likeness.

There was a gate near this spot between the Fish Gate to the North and the Gate of Ephraim to the South. A copy of Jesus’ death sentence is said to have been posted on this gate and for this reason, Christians have referred to it as Judgment Gate. Tradition has it that Jesus fell for the second time while passing through this gate on His way out of the city.

The Eighth Station: WEEP FOR ME

Embedded in the wall of the Greek Orthodox Convent of St. Charalambos is a stone marked with a Latin cross and the letters NIKA signifying the words “Jesus Christ Conquers”.

The Ninth Station has located on a street that the Crusaders referred to as “Malcuisant” – the place of bad cooking. It had a roof over it in their time, as it has today, and at the southern end, one can still see the smoke vents which served their army. It is still a food bazaar where meat, fish and other food are marketed.

The Tenth Station: DIVIDING THE RARMENTS

When the Crusaders arrived in 1099 they built this Romanesque Church that occupies the site of the Holy Sepulchre and Calvary. It is shared by Catholics, Greek Orthodox, Armenians, Syrians and Copts, while the Abyssinians occupy a portion of the roof and the Anglicans pray in the Chapel of Abraham situated above the Rock of Calvary.

At the entrance, we pass the stone of Unction where Christ’s body was prepared for burial. We then mount to the platform of Calvary which is divided into two chapels: one Greek Orthodox and one Latin or Roman Catholic. The Tenth Station is in the Latin chapel on the right of the entrance.

The Eleventh Station is located in the Latin chapel, a short distance away from the Tenth Station. The modern mosaics that cover the walls show Christ being nailed to the cross. It also shows the Patriarch Abraham preparing to sacrifice his son, Isaac. The picture of the Patriarch Abraham in the act of sacrificing his only son, in obedience of God’s command, has its place here on Calvary because, in his call to Abraham, God touched the lives of us all.

The place of Christ’s death on the Cross is in the Greek Orthodox chapel on Calvary. At the end of this chapel stands an oriental altar, and between its two supporting columns is a silver disc surrounding a cavity in the rock: the traditional spot of Christ’s crucifixion. Markings on the floor indicate where the crosses of the two thieves may have stood. An opening in the marble reveals the crevice in the rock caused by the earthquake which followed Christ’s death.

Golgotha – the place of the skull was indeed a dreadful place, covered with the bodies of the dead and dying. Mary and the other women were present when Jesus was taken down from the Cross and probably would have joined in the traditional lamination of the dead.

The Fourteenth Station: JESUS IS LAID IN THE TOMB

The Fourteenth Station is the Rotunda or circular part of the Basilica. The tomb of Christ is inside a small structure in the center of the Rotunda. The original tomb consisted of an anteroom furnished with benches for the mourners and an inner chamber where the body was laid on a stone couch. Within the Rotunda are two small areas serving as two tiny chapels. The first is in the Chapel of the Angel. In it are two pieces of burial stone placed over the grave of Jesus. In the dome of the Rotunda can be seen twelve rays of light, representing the connection between death and the Resurrection, the twelve rays symbolizing the twelve disciples On the other side of the structure is a small Coptic chapel. As we enter this small area you can see how they have access to the grave itself.

Other Elements of the Holy Sepulchre