Filming the Excavators of Jerusalem 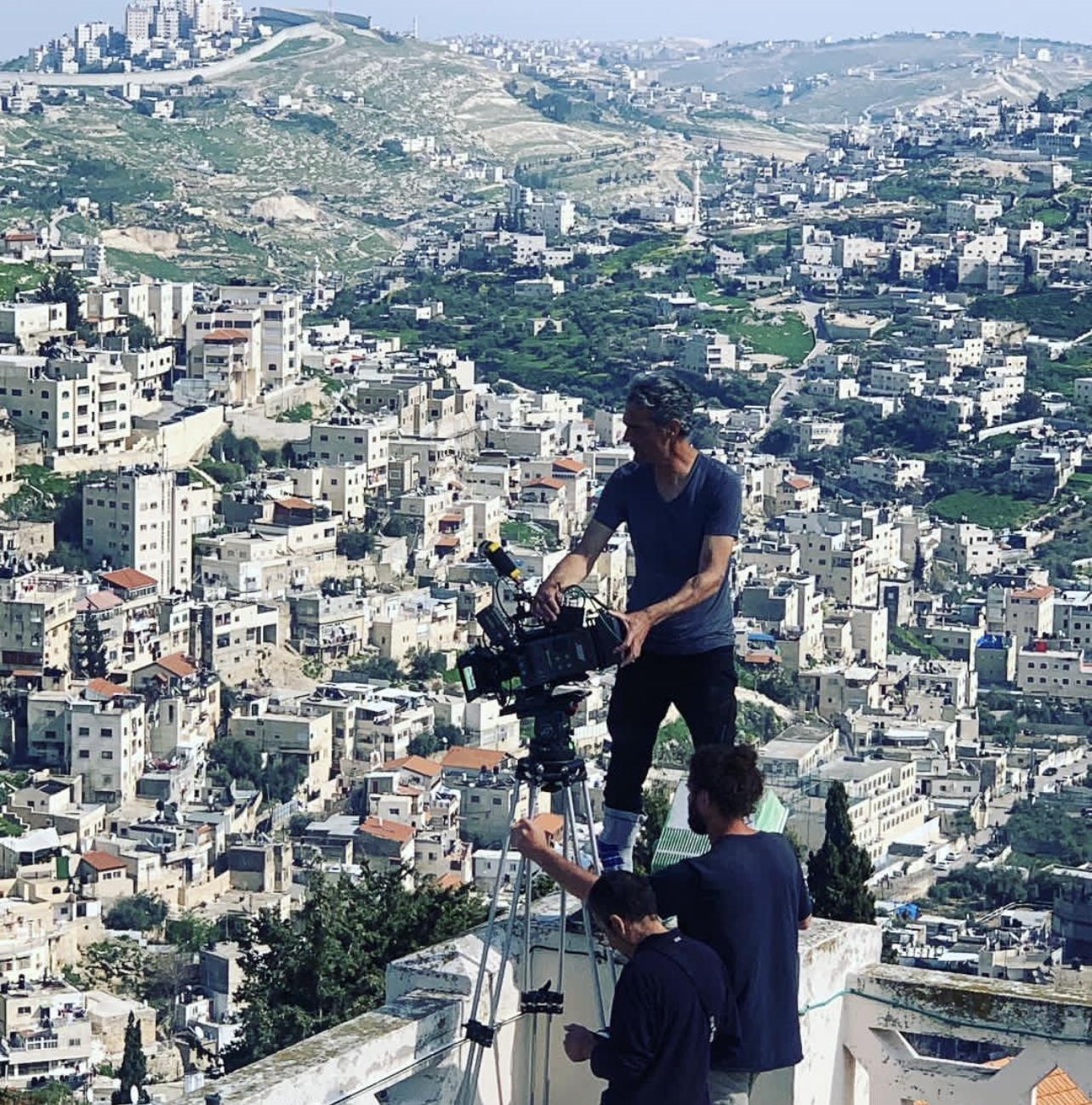 Due to its centrality in the Christian religion, Jerusalem was the first site in the Holy Land to be excavated; the excavators of Jerusalem, past and present, form an anthropomorphic mosaic of characters and an integral part of the city’s history.

The first excavation that took place in 1863 was conducted at a clearing of the ’Kings’ Tombs’ by a French soldier by the name of de Saulcy, who had traveled to the Holy Land following his wife’s death. The stone sarcophagi he found are exhibited today at the Louvre Museum.

Professor of classical archaeology. Professor Avi-Yonah has focused on the theoretical research of the city, synthesizing and interpreting the data. His reconstruction model of Second-Temple-period Jerusalem at the Israel Museum in Jerusalem still wins the admiration of spectators and scholars alike.

An archaeologist of American origin, who assisted Sir Flinders Petrie in his first excavation at Tell Hesi, Bliss was one of those who prepared the foundations for modern archaeological research in Israel. Archibald C. Dickesy excavated Mount Zion and the City of David (1894-1879) by means of tunnels – a popular excavation method that turned out to be ruinous in the long run.

A French epigrapher, archaeologist, orientalist, diplomat and pioneer in ancient Palestinian inscription research. In 1867, he was sent to Jerusalem as a translator for the French consulate. A superb philologist, his epigraphic discoveries include the Greek inscription from the Herodian period prohibiting the entrance of gentiles into the Temple court. In 1873-1874, he conducted wide-range research on the history of the Dome of the Rock and ancient Jewish burial customs in Jerusalem on behalf of the Palestinian Exploration Fund (PEF). As did Conrad Schick, documented all that he observed, without actually excavating.

With the establishment of the British Mandate came the ‘golden era’ of archaeology. John Garstang was the founder of the Antiquities Department of the British government in Palestine and the British School of Archaeology in Jerusalem. Enthusiastically supported by the Israeli public he proved the historical significance of the City of David. It had already been realized that an archaeological site as important as this could not be adequately studied by an archaeologist working alone, thus the Israeli Department of Antiquities decided to invite foreign schools of archaeology to participate in the excavation of the City of David.

British archaeologist and first woman President of the Oxford Archaeological Society. In 1961, under Jordanian rule, she began what would be seven years of excavations in Jerusalem. In her excavations, she employed a new stratigraphic method, involving trenches cut along the steep slopes of Jerusalem, after which her work was carefully recorded. For the first time, a historic framework for the city’s 3800 years of existence was established. Using the new methods of modern archaeology, Kenyon was able to answer questions brought up by former excavators, though some of her conclusions have been questioned. Since her death, three volumes on her Jerusalem expeditions have been published.

An Irish archaeologist. He won his reputation through his excavations at Gezer (1902-1909) – the first large-scale excavation carried out in Israel that was supported by the British Palestine Exploration Fund. Between 1923 and 1925, Macalister excavated the Ophel together with Duncan. Although challenged by Kathleen Kenyon, his relative chronology of the city walls has been confirmed by the subsequent excavations of Yigal Shiloh.

An Israeli historian and archaeologist, Professor Mazar became a member of the academic staff of the Hebrew University of Jerusalem in 1934 where he established a department for the Historical Geography of the Land of Israel. His largest and most important enterprise was the excavation south and west of the Temple Mount, where he unearthed remains from the Iron Age, Second Temple Period and Early Islamic period. His broad knowledge of the various Near Eastern fields of study, Biblical studies and archaeological research, and his ability to synthesize these disciplines, were his main legacy to three generations of scholars in Israel.

Directed by a friend’s dream, this British adventurer came to Jerusalem (1909-1911) seeking the treasures of the Temple. He dug a complex system of tunnels in the City of David and uncovered important data.

An American Bible scholar who identified numerous biblical sites in the Holy Land in 1838. Robinson was the first to identify the stones projecting from the western wall of the Temple Mount, near its southwestern corner, as the springers of a large arch.

Israeli archaeologist who directed the excavations at the City of David (1978-1985). He revealed important finds, thus providing a clearer picture of the 586 BCE destruction of Nebuchadnezzar and of early postexilic Jerusalem. Between 1983 and 1986, Shiloh served as Director of the Hebrew University’s Institute of Archaeology. In 1984, he published an interim assessment of the results from the City of David excavations.

A Swiss physician, who in 1845-1846 wrote a detailed description of the ancient remains of Jerusalem by matching these sites with the historical data. It was he, and not Charles W. Wilson, who first identified ‘Wilson’s Arch’ as the final arch of the bridge that led from the Upper City of Jerusalem to the Temple Mount.

Head of the French St. Etienne Monastery and Professor of archaeology at the Ecole Biblique et Archeologique Francais in Jerusalem. He accompanied Parker’s hunt for the Temple’s treasures (1909-1910) and recorded his finds. His enduring achievement is a series of massive studies of monumental complexes in Bethlehem, Hebron and Jerusalem. Despite new data that has been discovered, his works remain indispensable due to the wealth of data he assembled.

The renowned excavator of Jerusalem’s Temple Mount and southeastern hill (1867-1870). In 1867, he was commissioned by the Palestine Exploration Fund (PEF) to study the features of Jerusalem’s historic structures. His investigations heralded the development of stratigraphic excavation, and are still of great value thanks to the careful plans and diagrams he provided, although achieved under extraordinarily difficult conditions. Warren mapped the rock surface of the Temple Mount, as well as the water systems deriving from the Gihon Spring. He was the first to go through Hezekiah’s Tunnel. His findings were published in a volume co-edited with Claude R. Conder. Warren’s publications include Recovery of Jerusalem (with C.W. Wilson), Underground Jerusalem and The Temple and the Tomb. He joined the PEF committee in 1871 and remained a member until his death.

A French Egyptologist who was the first Jewish archaeologist to dig in the country (1913-1914). Weill arrived in Jerusalem as a representative of Baron Eduard de Rothschild in order to set foot in the City of David and particularly in reaction to the scandalous excavations of Parker. Weill was the first in Jerusalem to expose a wide excavation area rather than dig tunnels. Later, during 1923-1924, he returned to the City of David, again funded by Rothschild. He identified the hewn cavities as the tombs of the Judean kings. His most significant discovery was a Greek inscription mentioning two synagogue leaders, Theodotus and father Vettenos, dating to the late Second Temple Period. Following his first campaign in the City of David, Weill returned to France to take part in World War I. He was severely wounded and was awarded the Legion of Honor.

A British Royal Engineer whose meticulous survey of Jerusalem provided the basis for all subsequent studies of the city. Wilson’s survey work led to the foundation of the Palestine Exploration Fund (PEF) in 1865. Jerusalem was surveyed according to standard Ordnance Survey practice, at scales of 1:500, 1:2,500 and 1:10,000. The plans of the city and its important buildings along with 90 diagrams and 83 photographs were published by the Ordnance Survey in 1866. It was the first time that the topography of Jerusalem had been so accurately recorded. Wilson was chairman of the PEF at the time of his death.