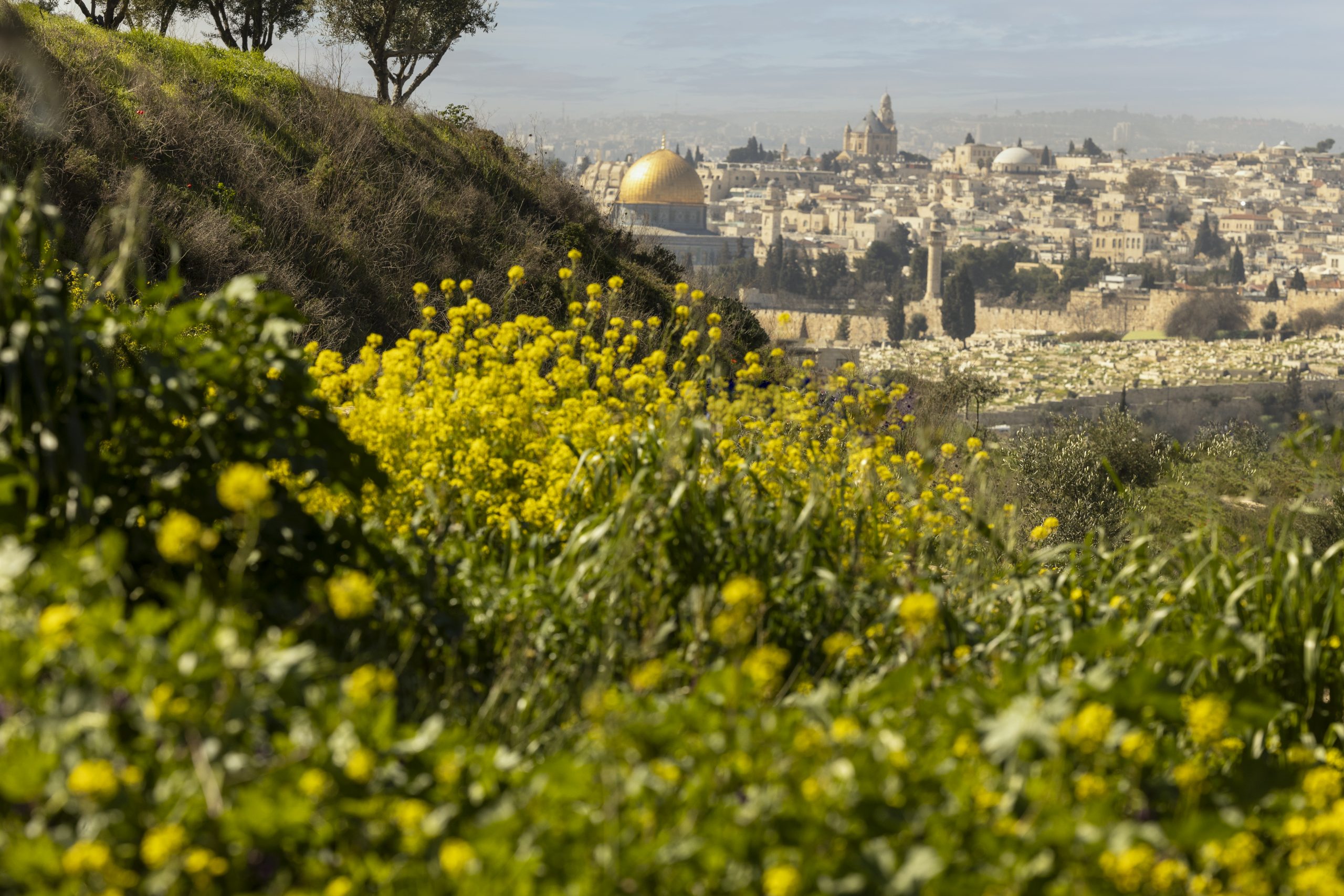 Sharon Schaveet, producer and expert in production in Israel, “It is our pleasure to recommend to you a list of film locations in Israel.

Following on from his extensive archeological excavations all over Israel, Shimon Gibson has identified many ideal film locations in Israel, especially those suitable for biblical productions.

Below is a list of locations, along with their historical context, suggested by Shimon. These key sites, located in Jerusalem, have revealed archaeological remains connected either to the story of Jesus or have topographical features associated with the Easter story.

Filming in the Mount of Olives

There is an excellent panorama from the Seven Arches Hotel on the Mount of Olives looking towards the Old City and the Temple Mount. This location would have been more or less the spot where Jesus and his followers would have seen Jerusalem for the first time on arriving in 30 CE from the direction of Bethany.

Gibson in his book shows that Jesus’ “triumphal” entrance into Jerusalem was made with very little public fanfare and was actually a modest affair. It was an occasion that had great significance for his followers.

South of the Temple Mount archaeological excavations have brought to light a major flight of steps from the first century CE which led up to one of the southern gates of the Temple Mount. It was from here Jesus would have reached the Temple Courts. Gibson shows in his book that Jesus’ demonstrative behavior in the area of the Temple with the over-turning of the tables of the money changers was a symbolic act for his followers.

Most of Jesus’ teaching activities were actually peaceful and conducted without any objections from the Temple authorities and with their full agreement. Hence, it was not because of these actions that Jesus was later arrested.

Filming in the Siloam Pool

This stepped pool was recently uncovered during archaeological excavations near the southern end of the City of David, and it was there Jesus healed a blind man.

Filming in the Bethesda Pool

This stepped pool is visible in the archaeological excavations in the compound of St Anne of the White Fathers near Lion’s Gate. It was here that Jesus healed an invalid. Gibson in his book has identified the actual flight of steps at the Bethesda Pool where Jesus undertook his healing. Gibson shows for the first time that the Siloam and Bethesda Pools were the key locations Jesus visited while in Jerusalem.

It was there he attracted crowds of thousands of pilgrims to him. The Jewish Temple authorities objected to the character of Jesus’ sign-and-wonders and healing activities conducted at these pools. They were unable to control his activities there.

The Roman authorities were afraid of the large size of the crowds gathering around him at the pools. This sealed his fate. Hence, contrary to the accepted view that Jesus’ triumphal entrance into Jerusalem together with his activities in the Temple area put Jesus into conflict with the authorities, Gibson argues that it was in fact his activities at the two main pools – the Siloam and Bethesda Pools – which led to his being arrested, tried and condemned to death. 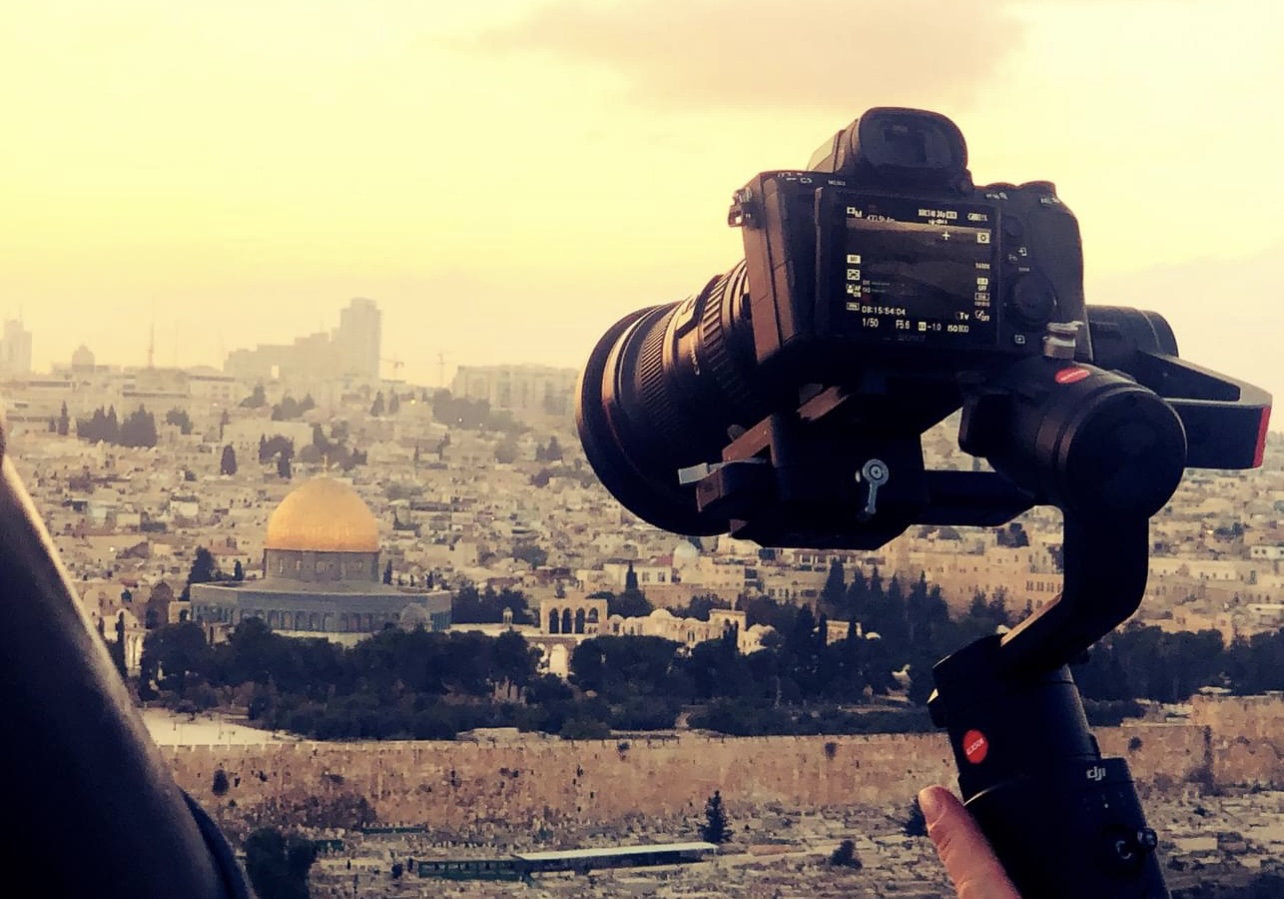 Filming in the  Room of the Last Supper

Tradition places the Room of the Last Supper on the summit of Mount Zion (the Cenacle). Numerous tourists visit there. Gibson demonstrates in his book that the traditional site is actually just one chamber within a large church built there in the twelfth century. Instead, Gibson shows that the original Room was most likely to have been close to the Siloam Pool. Recent archaeological excavations have brought to light part of a multi-story house at that spot dating from the first century CE. A house like this would have been where the Last Supper took place. It may be visited today.

Filming in the Gethsemane Cave

In the Kidron Valley on the slope of the Mount of Olives is a cave that has traditionally been associated with Jesus. There was some uncertainty among scholars regarding the validity of this tradition. Gibson in his book shows that olive presses were frequently established during the first century CE in caves around Jerusalem, strengthening this location as the one that Jesus and his disciples retired to on the evening of the Last Supper.

The rock base for the Antonia may be seen beneath the local Moslem Omariya School for children. Contrary to the view accepted by many that Jesus was tried and condemned here by Pilate, Gibson shows that this would not have been feasible owing to its very small size – it was basically just a tower. The Antonia was manned by Roman soldiers so that they could control events in the Temple courts and would definitely not have been the seat of the Roman Governor.

The Praetorium and the Place of the Trial of Jesus

Situated to the south of Jaffa Gate along the western Old City wall of Jerusalem, is a park with many archaeological remains of ancient fortification walls from different periods. This was where Herod the Great built a magnificent palace that equaled in grandeur the Jewish Temple itself. Gibson in his book has been able to pinpoint the exact place where the Trial of Jesus took place in a fortified gate area on the west side of the Praetorium building that was used by the Roman Governor Pontius Pilate in 30 CE.

This was where the tribunal took place and Jesus was brought out of the barracks adjoining the residence of Pilate. The Gabbatha and the “pavement” mentioned in the Gospel of John at the place of the tribunal are visible at the site. The archaeological results of these excavations are outstanding and have never been published before. Many tourists pass by this place without realizing the importance of the site for Christianity.

Filming in The Via Dolorosa

Today Christian pilgrims during Easter follow the route Jesus took from the place of the Trial to the place of the Crucifixion, along a narrow street in the northeast of the Old City. This route extends between the Antonia Fortress and the Church of the Holy Sepulchre. Pilgrims have been following this route since the time of the Crusades. Gibson shows in his book that the route of the traditional Via Dolorosa is completely wrong and that it took place in an entirely different part of the city to the south-west, extending between Herod the Great’s Palace and the Tomb of Jesus beneath the Church of the Holy Sepulchre.

A new reconstruction of the topography of the area of Golgotha – beneath the Church of the Holy Sepulchre – has been made by Gibson and is presented in his book. He is able to show that the “Rock of Calvary” shown within the present-day Church of the Holy Sepulcher cannot have been the place of crucifixion – it is too narrow and too high to have been of any use as a place of execution.

Golgotha was actually an expanse of rock extending beneath the Church of the Martyrium built by Constantine the Great. The place where the crucifixion was thought to have taken place was originally shown in the apse of this church and pilgrims walk across this area within the Church without realizing its significance.

The Rock of Calvary was actually a marker or a kind of signpost, indicating the general area of the Crucifixion.

Filming in Tomb of Jesus

The traditional site of the Tomb of Jesus beneath the Church of the Holy Sepulchre of today is examined by Gibson and found to be authentic. Hence, contrary to assertions made by other scholars that the exact place of the Tomb of Jesus is unknown – with proposed locations at the Garden Tomb north of the city, on the Mount of Olives, and more recently at Talpiot – Gibson demonstrates that the tomb situated at the traditional spot beneath the Church of the Holy Sepulcher has to be the most likely spot.

Filming in Family Tomb of Jesus

Another tomb in the Church of the Holy Sepulcher – only a few steps away from the traditional Tomb of Jesus – is traditionally associated with Joseph of Arimathea, but basing himself on the study of hundreds of first-century tombs in Jerusalem Gibson asserts that it had to be a tomb used by the close members of Jesus’ family, not for Joseph of Arimathea as has been traditionally maintained.

A first-century tomb was excavated by Gibson and his colleagues at Akeldama – the traditional Field of Blood – and inside it was the body of a leper wrapped in a shroud. This is the only shroud found in Jerusalem from the time of Jesus, and it opens up a discussion on the manner in which Jesus’ body was prepared for burial. It also shows quite clearly that the shroud of Jesus was in two parts: a body shroud and a covering for the head. Hence, the Turin Shroud cannot be the Shroud of Jesus as many have maintained for hundreds of years.

In his new book, The Final Days of Jesus (Harper One, 2009) Shimon Gibson looks at the critical week preceding Jesus’ death by crucifixion. He unveils a vivid picture of first-century Jerusalem, its monuments, streets and houses, and, of course, the Jewish Temple which was the jewel in the crown of the city. The Jesus portrayed by Gibson is a teacher and healer who captures the fascination of the Jewish crowds in Jerusalem and ultimately is feared by the Jewish and Roman authorities.

There are hundreds of locations in Israel that can be used for biblical productions. These spectacular sites capture the ambiance of times past and help re-tell biblical stories in an exciting manner. Having such powerful visuals can lift the story off of the page and truly bring the bible back to life. For professional production services in Israel, Biblical Productions is the number one choice. Experienced and knowledgeable we make your filming in Israel easier and your final product one you can be proud of.

Professor Gibson is a British-born archaeologist working in Jerusalem, where he is currently a Senior Associate Fellow at the W. F. Albright Institute of Archaeological Research. He has an appointment as an adjunct Professor of Archaeology at the University of North Carolina at Charlotte.