“Everyone has a city, and its name is Jerusalem”

Jerusalem is considered a holy city by Jews, Christians, and Moslems from all over the world. It has some of the trappings of an ordinary modern city, but Jerusalem’s heart and true uniqueness lie inside its Old City’s walls.

Within an approximately one square kilometer area lies the Church of the Holy Sepulcher, the Dome of the Rock, the Western Wall, and centuries of historical treasures piled layer upon layer, only to be discovered occasionally during archeological excavations.

The Old City is set apart from the modern city by a wall with seven open gates. A great deal of the city’s rich history comes to light by learning more about these gates. The wall that is standing today, as well as most of the gates, was built by the Ottoman Sultan, Suleiman the Magnificent, between 1535 and 1541.

It is not completely clear to historians why Suleiman built the wall around the city. For hundreds of years prior to Ottoman rule, Jerusalem did not have secure walls surrounding it. Some scholars claim that the Turks feared a second crusade from Europe; others argue that the main reason was to protect the city from attacks from violent Bedouins. Although the reason for the wall is not clear, the purpose of each gate is evident. The function of each gate throughout history usually comes across in the evolution of the gate’s name. Overall, by reviewing each gate, one can better understand the history of the city as well as the demographic developments and changes that have taken place over the years. 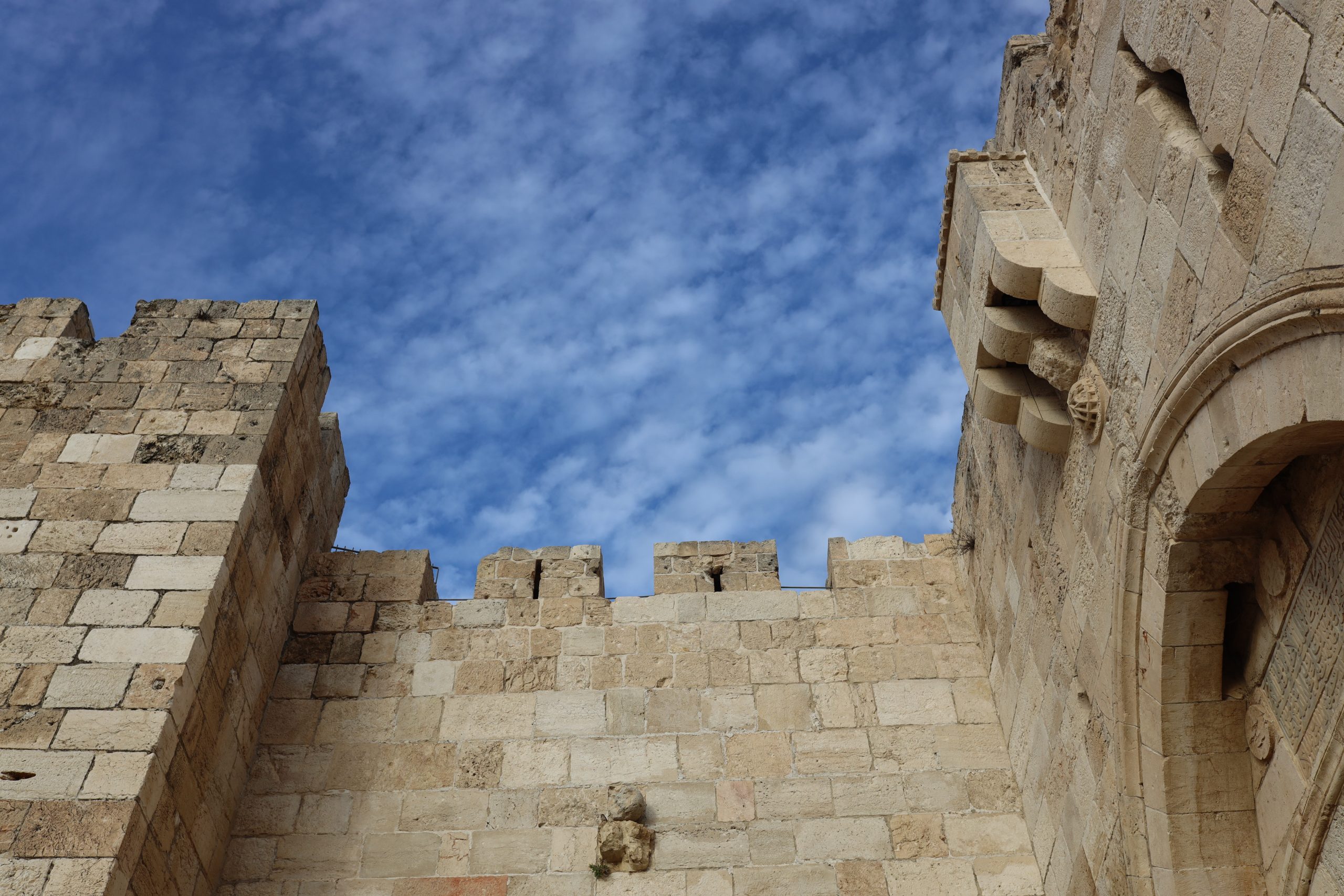 The Jaffa Gate is the largest and is considered to be one of the main gates of Jerusalem’s Old City, which today can be accessed on foot and by car. Situated above the Hinnom Valley, its topographical benefits are the reason why the Jaffa Gate was the primary gate during most of its history. The reason why it is called Jaffa Gate is that during the 19th century the traffic to and from the main port of Jaffa passed through this gate.

There are three inscriptions around the gate that explain its history. The main inscription, found above the gate, denotes the Ottoman Sultan, Suleiman the Magnificent, who ruled over Jerusalem during the wall’s construction, between 1537 and 1540.

The Jaffa Gate was also known throughout the centuries as Hebron Gate, or Bab al-Khalil, which is a phrase in Arabic referring to Abraham the friend of God, because Abraham is connected to the city of Hebron, and this gate led to Hebron. The second inscription, found inside the gate, refers to this name. The inscription reads: “There is no God aside from Allah and Abraham is loved by God.” In the past, the gate was also referred to as Bethlehem Gate (because it led to Bethlehem) and during the Crusader period, David’s Gate (because of its close proximity to the Tower of David).

The final inscription is found outside the gate, to the right of the entrance, above a stone bench. It was added after the Six-Day War when the wall underwent repairs. It reads: “On the 19th of December 1969 the repair of the city’s walls was completed.” This is accompanied by a quote from the book of Nehemiah referring to the completion of the city’s walls.

The origin of this gate’s name is, quite unimaginatively, because it is the most recent gate added to the Old City’s walls. Built in 1889, the New Gate was created due to pressure from the French Ambassador on Sultan Abdul Hamid II to ease the passage between convents and churches in the Old City and hostels built for pilgrims outside of the Old City walls. In Arabic, the gate is called Bab Abdul el-Hamid, after the Sultan who built the gate. 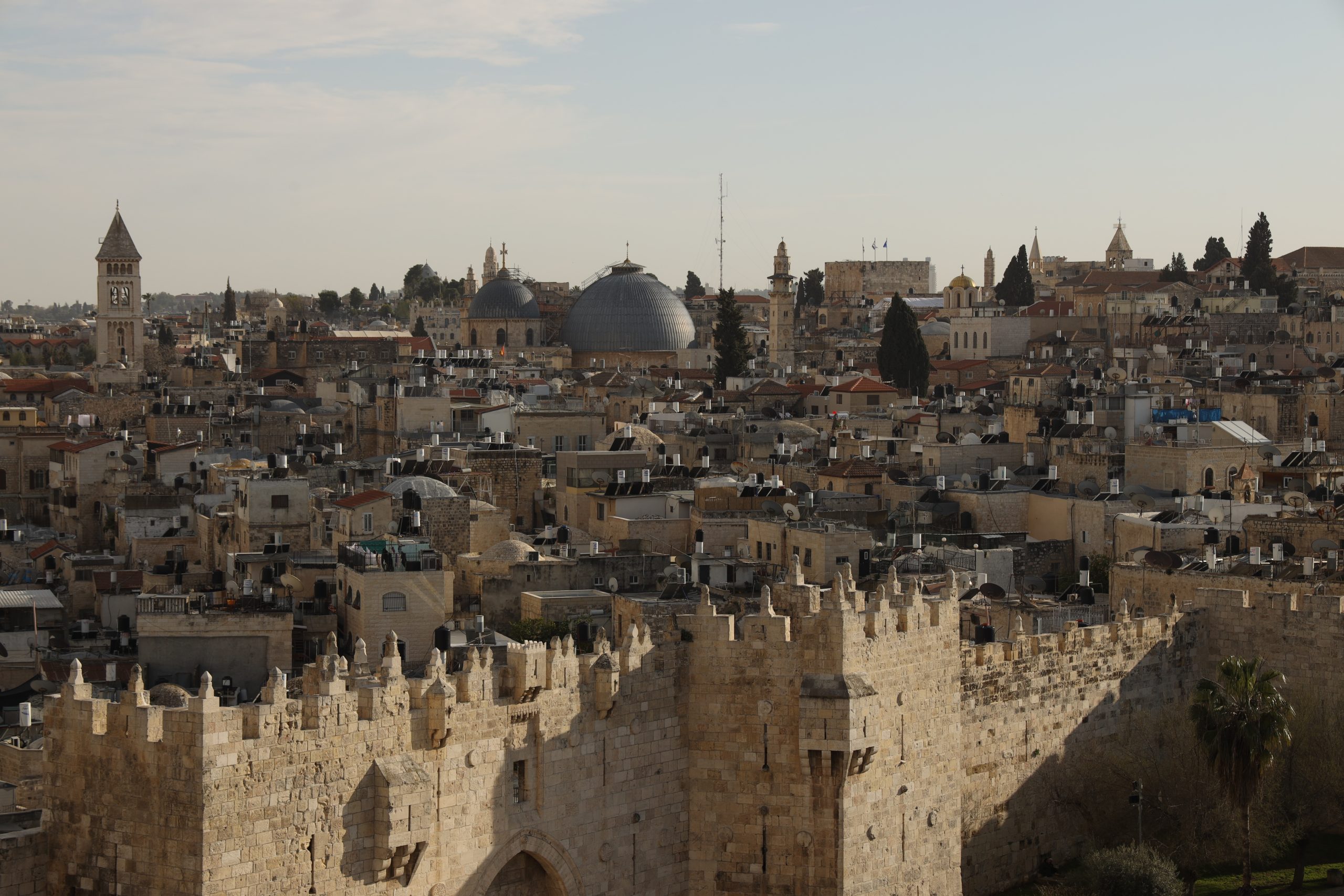 Built in 1538, by Suleiman the Magnificent, the Damascus Gate is the most visually striking of all the gates. Since the time of Herod’s rule over Jerusalem, the location of the Damascus Gate has served as the main passageway from the Old City to the direction of Damascus and Nablus (in Hebrew the gate is called Shechem Gate – Hebrew for Nablus). The Arabic name for the gate is Bab al-Amud or the “Column Gate”, originating from a column that stood opposite the gate during the Roman era, which held a statue of Caesar. The Damascus Gate was the main gate to the old city during the Roman era. The existence of this pillar is noted in the ancient Madaba map, which was found in a church in Jordan and contains a detailed map of the old city of Jerusalem during the Byzantine period (for more information on the map see the article – “The Madaba Map and Jerusalem”).

Like most of the Old City’s gates, the Damascus Gate also has a Christian name given to it during the Crusader period. It was called St. Stephen’s Gate, after the first martyr, Saint Stephen, because the gate led to his burial site. Jewish pilgrims during the Middle Ages referred to the gate as “Abraham’s Gate.”

Herod’s Gate, also known in Arabic as the Flower Gate, leads to the Moslem quarter. It is called Herod’s Gate because in the late Middle Ages it was believed that a crusader church in the middle of the Moslem quarter was built on the remains of Herod’s palace. This crusader church became a mosque called Dir Al Adas. Flower Gate, a second name for the gate, originates from a misunderstanding. The gate was named after a nearby Moslem cemetery, al-Sahairad, but the name of the cemetery is similar to the word for Flower, which led to confusion in the pronunciation. And thus, over time the gate became known as the Flower Gate. The gate was closed until 1875, and after it was opened the first Arab buildings were built outside of the city walls, including large private houses surrounded by vast land. Over time an Arab neighborhood developed next to the gate called Bab-al-Sahairad– the flower gate neighborhood.

The Lion’s Gate is the only open gate on the Eastern side of the wall. Like most of the gates, it has had many names throughout history, given to it by Jews, Arabs, and Christians. Its present name, Lion’s Gate, was given by Jews in the mid-19th century. On the outside of the gate there are four images of Lions which is the reason for the gate’s name. Some believe that the lions are the insignia of Sultan Baybares who ruled over Israel and Jerusalem from 1260.

The gate is significant in modern Israeli history because IDF paratroopers entered the Old City through this gate during the Six-Day War. The Lion’s Gate is also significant because it is along the route of the Via Dolorosa.

In earlier times there was no gate at this location, because during the First and Second Temple periods, and during the Byzantine era, Mount Zion was considered part of Jerusalem. The mountain was first secluded from the city in the 11th century before Jerusalem was conquered by the Crusaders. During the Crusader period, there was a gate and a wicket at this site that eased the passage from the city to Mount Zion, where an illustrious Crusader church was located. Afterward, the Moslem conquerors, who captured the city from the Crusaders, built a stronger and more elaborate gate a few meters away.

When Mount Zion was not part of the Old City a gate was needed in order to allow a passageway for people of different faiths worshiping at different holy sites on the mountain. The importance of Zion Gate is not a topographic one, but rather a political-economic one, because it indicated whether or not Mount Zion was included in the Old City throughout history.

The Dung Gate, adjacent to the Southern Wall excavations and the Jewish Quarter, is first referred to in biblical texts. Its name, Dung Gate, or in Hebrew Ha’ashpot, is mentioned in the book of Nehemiah. However, the biblical gate appears to have been more south that the Dung Gate of today. The gate’s name hints at its prior purpose. In previous generations, garbage and waste were taken out of the city through this gate because, due to its holiness, it was forbidden to have garbage in the city. This gate also served as the passageway to Jerusalem’s ancient water sources: the Gihon Springs and the Rogel Well.

One Arabic name for the gate is Bab al-Maarbe – The Gate of the Westerners, after Muslims from North Africa who settled across from the Western Wall. During the Middle Ages, the gate was called Bab Siloam because you had to pass through this gate to reach the Siloam village.

Like the other gates, the Dung Gate was built during the Ottoman period, and it was the smallest of the city’s gates. The Ottomans built the gate with an obstructed path that was on an angle in order to prevent quick entrance into the city. During Jordanian rule of the Old City, the barrier was removed and the gate was widened to allow for car traffic, much like the Lion’s Gate and Herod’s Gate. The gate was renovated again in 1985.